SUCCESSFUL LAUNCH OF PROGRAM “THE MUSEUM VISITS YOUR SCHOOL” IN CALAMA 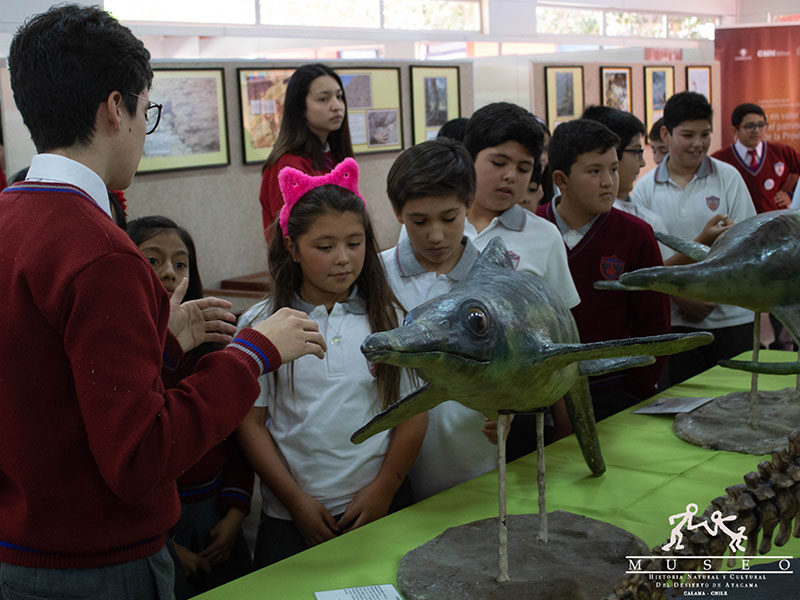 With the aim of continuing to contribute to the formation and identity building of the students of the commune, the Museum of Natural and Cultural History of the Atacama Desert, inaugurated a new version of the educational project that over the last five years, has soaked in culture, the loin classrooms.

Composed of the exhibitions “Dinosaurs of northern Chile” and “Ruta de cobre Atacameño”, the exhibition inaugurated at the Leonardo Da Vinci College on May 9, has as its main goal to transform into a complementary learning tool, but characterized by its strong roots with the area.

“We want to show the variety of natural manifestations offered by our desert, to make better known the memorable facts of our geological past, and we believe that the effort should be mainly focused on youth, for it will be the heir to the cluster of knowledge of the origin of life on earth, and the continuation of our research work. That is why this program disseminates the subjects that help us to know in a different way the territory that we inhabit”, says Osvaldo Rojas, Director of the museum, in reference to the exhibition that will be presented in different establishments the rest of the year.

In particular, they are pieces of different collections that comprise biological, evolutionary, social and cultural processes of the region that, accompanied by a talk, allow students to approach the contents in a playful and interactive way. “We know that kids don’t get much of a rock with a bone, so our idea is to show the real fossil itself, but accompanied by a mock-up so we can explain how the process of fossilization, or how many millions of years ago these animals lived here on earth. Sometimes they tend to see it more as science fiction, so witnessing all this impresses them a lot,” says Jennyfer Rojas, MuHNCAL Paleontology Specialist.

In addition to prehistory, the project includes a sample around the ancient inhabitants of the region, and how copper had been processing copper in elements of ritual use since ancient times. This theme is complemented by the exhibition of a replica of the “Copper Man”, which allows them to investigate around this discovery, its current state and its future.

Given their powerful connection to the reality of the students, the interest of both themes in them begins to be reflected during the montage the day before. “It’s not just kids who are surprised when they see us coming in with huge models. It also happens with assistants and teachers who stay for the talk. That is why it is a very enriching activity for us, because we see interest from the whole community”, explains the specialist who, in response to that trust, tries to be as informed as possible, to deliver a completely updated sample. “In fact that’s the main reason we keep this program, and we’re updating it according to new discoveries, because logically from 2015 until now a lot has happened,” he adds.

It is worth mentioning that, although the ages of the public vary constantly, professionals adapt to them without problems, being able to bring a part of each museum collection to the educational communities and, above all, to leave in them a footprint that is reflects on the interest they arouse each time a new roadmap is defined.