PALEONTOLOGISTS FIND VESTIGES OF A PLIOSAUR IN CALAMA 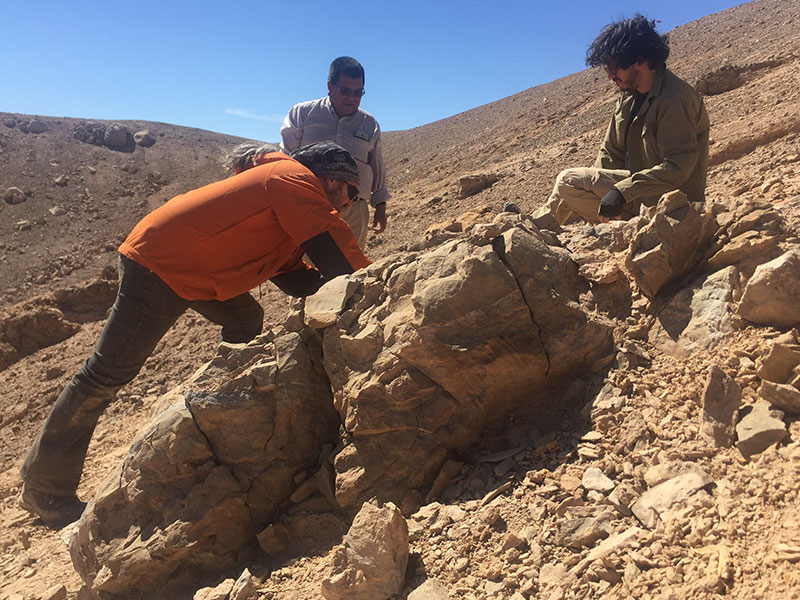 The discovery of fossil remains in Cerritos Bayos, proves the existence of the most lethal marine predator of the Jurassic era.

in December 2018, when a group of researchers from the Ring Network of the University of Chile and the Museum of Natural and Cultural History of the Atacama Desert, a unit dependent on the Corporation of Culture and Tourism of Calama, began a cadastre to determine the presence of large fossil marine vertebrates in the sector called “Cerros Bayos”, south of the city of Calama, The maximum existing registry of marine reptiles and other species that lived more than 150 million years ago.

As a result of these surveys, it was possible to determine the presence of a Pliosaur which cannot yet be specified piece by piece. However, it is possible to determine a fin and part of the skull that have already been confirmed. The researchers are optimistic in a process that should culminate in the extraction and transfer to the MUHNCAL deposit for study, cleaning, and subsequent exhibition. “The contribution of this finding, both at the scientific level and for the community is unique, since each of the species found provides new information to reconstruct the past of our commune and understand how the species evolve,” says the paleontology specialist at Muhncal Jennyfer Rojas Museum.

In reconstruction, Calama has gained prominence in recent times, after it was found that far from being a desert area as it is known today, it was formerly covered by sea and, therefore, was the habitat of a series of amazing species. But although these features have changed, due to the elevation of the Andes, it allows the appearance of remains of prehistoric fauna that remained hidden due to erosion, and that today make it one of the richest areas for paleontological research in Chile.

Given the heritage value of the pieces found, the extraction process involves completely removing the fragile rock and then transporting it to extract the fossil bones in the laboratory. Special attention is given to this finding, as there are no records of pliosaurs for this area and the result of this exhaustive work carried out by renowned national and foreign researchers, indicates the existence of unknown fauna for the territory, presenting once again Calama city as one of the most important fossil vertebrate fauna registration area in South America.